Projection Mapping can create alternative realities by projecting video images on just about any object or surface. But the special projectors located in the stage truss need connectivity to Media Servers that map imagery triggered by audio cues.

Synopsis
Complex productions using Projection Mapping require connectivity to all kinds of audio, video projection, camera, lighting, and control systems. These systems need high quality communications between the "Front of House" stage and the stage truss to Media Servers and Control Consoles. Lots of bulky and heavy copper cables strung across a venue are highly problematic. Advanced Staging Productions needed a better way to provide communications between media servers, projectors and other integrated devices supporting the use of Projection Mapping technology.

The Picture
Patton's FiberPlex TDP Rack, located at the Control Console, is populated with TD units that convert 3G-SDI, HDMI, Audio, and RS-232 control signals to Fiber, and connects to Fiber bundles run to the Stage and Stage Truss. At the Front of House the TTM Truss Rack is also populated with TD-Units converting fiber back for connectivity to Speakers, Robocams, and Projectors. 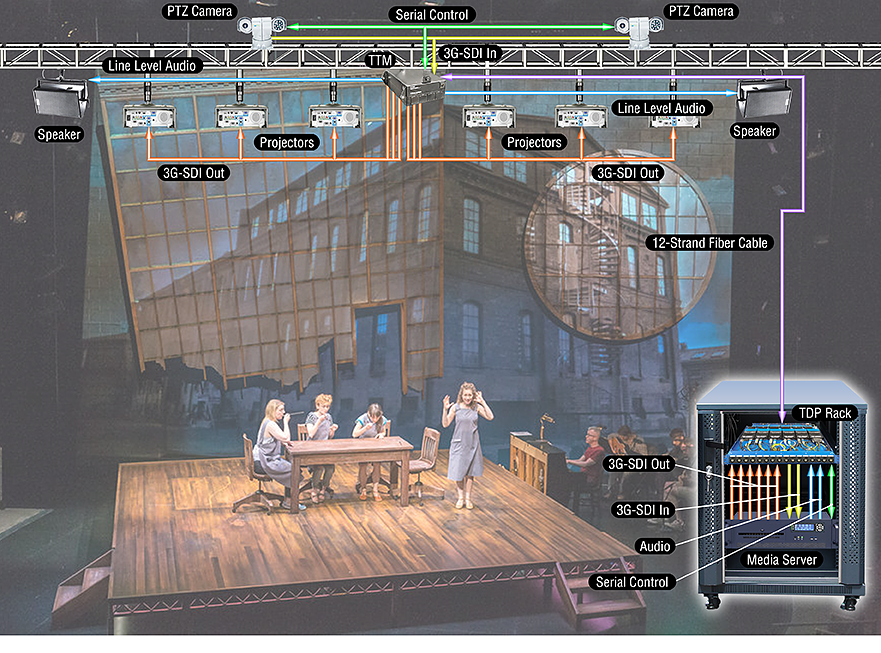 The Story
"Projection Mapping" is becoming a big deal in the AV staging and lighting for both indoor and outdoor live theater productions. Projection Mapping is a pretty cool technology that can turn about anything, including irregularly shaped objects into display surfaces for video projection. These surfaces include complex landscapes, backdrops or stage-set elements. Projections can even be made on buildings, ceilings, side walls or even small items like a picture frame or chair.

Special software interacts with a projector to fit any desired image onto the surface of a target object. Extra dimensions, optical illusions and impressions of movement can be given to static objects. The projected video is commonly combined with, or triggered by, audio to create an audio-visual narrative. Projection Mapping is increasingly used by Walt Disney Imagineering and Walt Disney Creative Entertainment in Disney Parks.

Advanced Staging Productions (ASP) in West Chester, Pennsylvania works with Projection Mapping and they are one of the best in the business. Their video engineers, lighting experts and audio technicians have worked the gamut of projects; and in these high-tech projects, experience really matters.

All kinds of audio, video display, and camera systems are in place to support these large productions. Media Servers are used to map imagery, pixel by pixel. Special video projectors are used to display images on various objects. Robocams and special lighting systems are also connected to control consoles. Systems need Front of House connectivity back to a Control Booth. Some of these venues are supporting multi-stage installations or stadium events where the Control Booth can be more than 500 feet from the stage.

Installing loads of bulky and heavy copper cables strung across a venue can become problematic. ASP needed to find a better way to provide communications between media servers and projectors and other integrated devices supporting the use of Projection Mapping technology.

The FiberPlex product was the perfect solution by providing the electronic interfaces on a single optical fiber cable. In particular, the TD-Series Fiber products are perfect for such scenarios. In this case, ASP used the TD units to connect eight 3G-SDI, two bidirectional balanced audio lines, one HDMI feed, and RS-232 control for the Robocams all to a single 1U rack at the Console. All signals are transported through a single trunk of 12-strand single-mode tactical fiber. The solution used one cable run to the truss, which broke out to the six projectors along with the data.

The same TD units are also used for point-to-point communications, running video control over optical link from the control booth to the front-of-house stage; and alternatives to a second stage several hundred feet. The TD units include two ports for interchanging SFP/SFP+ modules capable of converting analog video, SD/HD, 3G-SDI or HDMI media formats, as well as full duplex and BiDi optical signals, 10/100/1000 Mbps Ethernet, 10 Gbps Ethernet, and MADI. TD transceivers can also convert Dante, AVB, CobraNet and EtherSound audio protocols, and can even convert between singlemode and multimode fiber.

The flexibility of the TD units means that Advanced Staging Productions can pull the needed SFPs for any given event or venue and deliver the needed quality connectivity.