Multi-Image Group saved tons of money and was able to interconnect their own systems, and leverage existing singlemode fiber and existing Pro-AV systems at the stadium used by the Dallas Cowboys.

Synopsis
When Multi-Image Group was planning an event in Dallas, they wanted to leverage in-place stage-racked speakers, video displays, and other systems in AT&T Stadium. This meant also using the existing multimode fiber infrastructure connecting those devices. But their equipment supported multimode interfaces while Cowboys Stadium was wired with singlemode fiber runs.

The Picture
The drawing below shows the Audio portion of the installation. The Digico SD10 is connected to SD Racks interfacing to microphone, instruments and other inputs as well as various speaker systems. 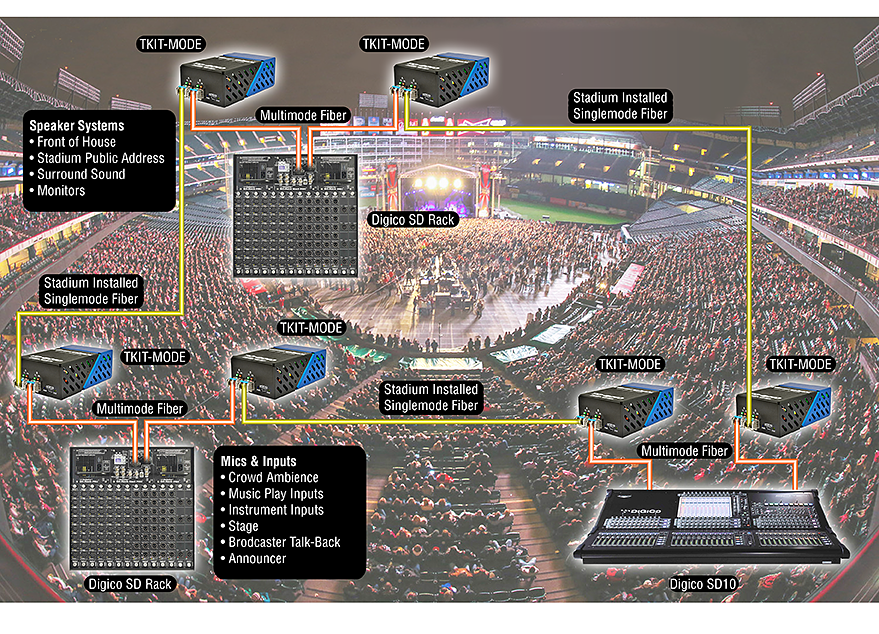 The Story
The AT&T Stadium in Arlington, previously known as the Dallas Cowboys Stadium has close to five million feet of singlemode fiber cabling run all over the facility. The fiber cable supports connectivity to all kinds of end-points including audio inputs, speakers, controls and more than 3,000 Sony LCD displays. The stadium also has one of the world's largest high-definition TVs, weighing in at 600 tons.

Multi Image Group is an event production company specializing in live events, creative digital content and exhibitions. They produce 200 live-events and meetings a year nationwide with project values that range from $40K to $4.5M, and attendee participation between 50 and 37,000 people. They operate some spectacular multi-sensory stadium events including at the stadium also used by the Dallas Cowboys.

When Multi-Image Group was planning an event in Dallas, they wanted to leverage in-place-stage-racked speakers, video displays and other systems in the stadium. This meant also using the existing multi-mode fiber infrastructure connecting to those devices. But they had to overcome a big problem. Their equipment, including the main DiGiCo SD10 mixer, is equipped with an Optocore 2G fiber interfaces, which provide multimode fiber connectivity. The stadium infrastructure was all single-mode and therefore not compatible.

The solution turned out to be a FiberPlex TD-6010, which is able to delivery any-to-any multimode to singlemode fiber conversion. The TD-6010 is a universal SFP frame that can take any variety of electrical or optical SFP, from MADI and ETH to singlemode and multimode fiber. The TD-6010 frame has two cages, an input cage and an output cage for SFP plug-in modules. SFPs from FiberPlex come in BNC, SD/HD-SDI, as well as full-duplex optical, BiDi, and HDMI-DVI and for multimode and singlemode optical. The TD-6010 supports up to 12.5 Gbps per SFP for high bandwidth applications. Now, anytime Multi-Image goes to AT&T Stadium to set up an event, they just bring along the TD-6010 units. They can run audio over fiber from the mixer to various stage racks throughout the stadium. They can connect their Video Media Servers to any display.

Multi-Image also uses the FiberPlex TIS-8632. This is an Ethernet switch with SFPs receptacles used to convert between CAT5 and fiber in order to run audio over Dante to various stage boxes from a production Yamaha mixer.

FiberPlex delivered a solution where Multi-Image can use the building's fiber infrastructure to transport data, audio and video signals where they are needed. They avoided having to run their own separate cabling at the venue, saving loads of money, time and transport.