The Picture
Using state-of-the-art hardware and packet filtering techniques, the call is not hampered in any way when intercepted at the SN10K sub-system in the service provider network. 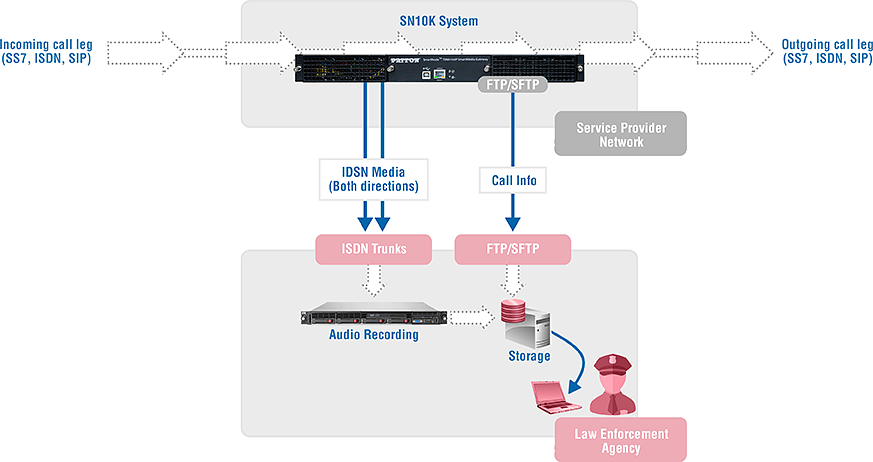 The Details
IP Network is the backbone of any modern voice communication network and the explosion of the enterprise to enterprise communication conflict with the federal and state compliances of lawful interception. The transnational communication, service interruption to introduce any surveillance system and the evolving private network communication add complexity to such interception. So, providing lawful interception is becoming a challenge for communication service providers to meet the federal and state mandatory legal compliances. Pattons lawful interception solution is deployed at the core of the service provider network where it can tap into communication from cell-towers, base service centres, class /5 switches and can perform full-duplex monitoring. It can filter out various signalling protocols such as SS7/ISDN/SIP, HDLC frames and raw traffic from the network interfaces (E1/T1/J1/DS3/STM-1). The packet capturing is streamed at the line speeds resulting in no packet loss. The packet capture is performed at the hardware level on a dedicated unit, and hence it does not overload the existing network sub-systems with software or hardware patches. Being a dedicated intercept point, it does not act like a hardware probe which may introduce latency and compromise performance. The hardware processors selectively intercept relevant packets and record it. It collects both the signalling and the media information of the call. The media (ISDN both ways) and signalling (FTP/SFTP) information is handed over standard interface compliant with ETSI 201 671 v2-1-1. The data can then be further stored and processed.