A Media Gateway is a networking device that provides valuable and essential functions for organizations, service providers, and network operators. When interconnecting traditional time-division-multiplexed (TDM) telephony systems with modern voice-over-internet protocol (VoIP) systems, a VoIP media gateway works by providing protocol conversion (translation) and interoperability between the two network technologies. Also known as an IP media gateway or SIP media gateway, the device converts a traditional analog plain-old-telephone-system (POTS) voice signal or related digital telephony signals such as T1, DS3, STM1 or OC3 into packets for transmission over a data network such as the Internet, private IP Network or a corporate LAN. When the legacy system is based on digital integrated services digital network (ISDN) technology, the device may be called a digital VoIP gateway or ISDN media gateway. Some manufacturers combine gateway functionality with WAN-access (internet-access) capability into a single device or network appliance. Such a dual-purpose device may be known as an access media gateway.

Many organizations are replacing their traditional public-switched-telephone-network (PSTN) trunk lines (T1/E1/PRI) with voice-over-IP (VoIP) trunks. Since the most popular modern VoIP protocol today is the session initiation protocol or SIP, the VoIP trunk is usually called a SIP trunk and the gateway may be called a trunk media gateway. The diagram below shows a SIP trunk gateway within a VoIP network application.

Any size enterprise can use a media gateway to transition gradually from legacy circuit-switched, time-division-multiplexed (TDM) infrastructure to packet-switched internet-protocol (IP) network architecture. When embarking on ALL-IP network transformation, a SIP gateway is an essential element.

Many network operators today maintain legacy TDM and modern IP networks concurrently, with interconnections between them. A telecom media gateway provides protocol conversion and interoperability between the two disparate networks. Often another device, known as a media-gateway controller, is employed to provide signaling and call control for the telecom gateway using the Internet Engineering Task Force (IETF) standard Media Gateway Control Protocol (MGCP). Such a hybrid service provider network architecture is depicted in the drawing below. 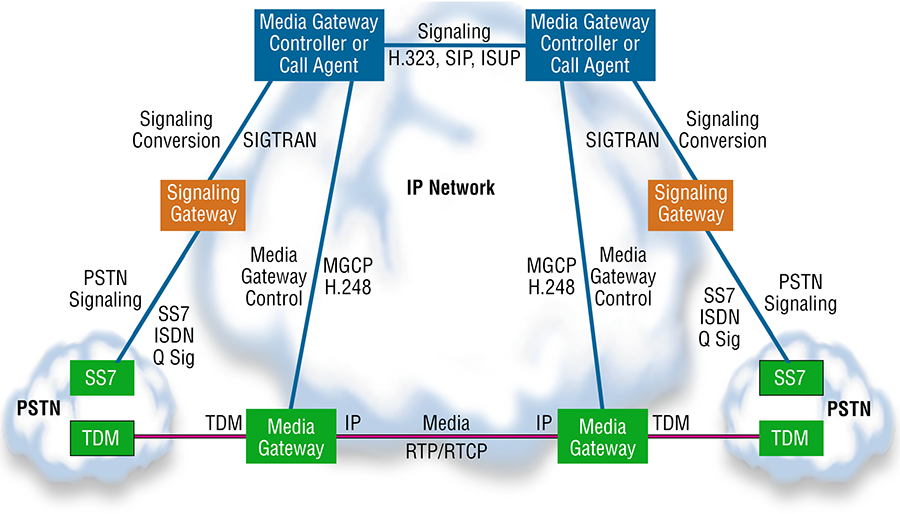 There are several types of media gateways to address the differing requirements of various network applications. Considerations include the type of legacy technology (ISDN or POTS), number of concurrent calls you require, and any added features desired (WAN optimization, downstream QoS, SIP TLS, SRTP, stateful firewall, auto-provisioning, and so on.)

A trunking gateway connects a large number of phone lines to a SIP trunk.

The SmartNode SN4170 PBX Media Gateway is designed to address the PRI-SIP Gateway requirements of small and medium-sized enterprises. This PBX gateway provides a cost-effective way to bridge PBX systems on multiple sites or connect them to a public Internet telephony service.

The SmartNode 5570 enterprise session border controller (eSBC) and router is a highly-flexible business media gateway that provides a bridge from a wide range of IP-PBX products to a SIP trunk service provider. Built-in Security features such as SIP TLS, SRTP, Stateful Firewall and secure provisioning, it protects the LAN networks from fraud strikes out of the Internet.

Used in carrier and service-provider networks, in the core or on the edge, the interconnect media gateway does just what it says: interconnects a legacy SS7 carrier network with a modern IP network.

How to Choose the Best Media Gateway

Look for the following capabilities when selecting a VoIP media gateway for your busines: